As usual, there are so many treats and snacks that our family enjoys on a yearly basis. There are some classics: Dole Whip Float, Churro, Popcorn and Beignets.

This time around, we were able to enjoy the Dole Whip Floats with a SPLASH of RUM! OFF SITE! We got it from theNow you can get it at Tongoroa Terrace next to Trader Sam’s. Same great taste with rum, who can deny that’s a great combo.

Every time I turned around, my husband had another container of popcorn. Sometimes, I think we should at least become an annual passholder to get the $1 refill buckets. So my family will be forever in popcorn!

My daughter is unintentionally like her grandmother who came to Disneyland in high school who spent her only money on a frozen banana. My daughter literally will ask me if it’s an appropriate hour to buy a banana. She says she enjoys the mixture of nuts, chocolate and frozen bananas. She highly recommends it for everyone.

The corn in Disneyland always takes me by surprise. I end up overbuying the turkey legs and underbuying the corn on the cob. One turkey leg can feed our 3 girls and 4 corns can feed our same 3 girls. They always want to eat the whole thing. Now the one year old wants MORE corn and I was in tears when she accidently dropped it into the Rivers of America. NOOOOO!!! NOT THE CORN! The butter only is the only type we will eat. That and the massive watermelon. 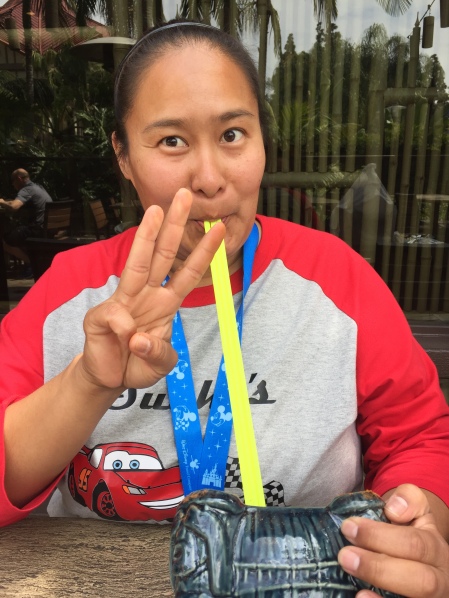 Lisa has spent the last two summers hoping the finish the Uh-Oa which is a tiki drink that requires at least two drinkers. It catches on fire and if you want, you can purchase the cup after. We love our cup as a pen holder… IT WAS ONCE FULL OF RUM. Now, Lisa finally has her own. Not the most tasty treat but the most boozy I had.

Beignets and Mint Juleps. The classic New Orleans Square treat. These tasty little donuts are so yummy, I always regret not getting more.  The Mint Juleps are the perfect light and airy drink for hot days… limey and minty. Head right for the Mint Julep bar when you are hot.

One of our newest treats was the Triple Scoop Sundaes which we shared as a family. And you get to keep the kitchen sink! I wanted the Oswald but my picky eater decided on the a neapolitan. So much ice cream we were eating it an hour later in the hotel. I use it for my post-its now.

Overall, some new and some old treats. Try them all or eat what you want. The treats always are fun for all.